This is the third episode of a campaign representing fictitious battles in the air over the Western Front during the First World War. It was initially planned to use the Wings of Glory rules, but these were modified to use hex based movement in order to facilitate remote play over the Internet due to Corona restrictions.

When the pilots are seated, Major Redmond, their Intelligence Officer, addresses them “Gentlemen. The German offensive at St Crupelle continues without slowing down. Day by day, step by step, the British and Canadian forces have been pushed back. Now only two small bridgeheads remain on the northern shore of the Juliana Canal. In the ruins of St Crupelle itself, the 2nd Battalion Dampshire Regiment are hanging on by the skin of their teeth. In recent days, the division headquarters has lost contact with the battalion as the front line is now very fluid. You will carry out a contact patrol, fly low over the fighting, identify the positions of friendly troops, and report back, thus enabling Army HQ to build up a picture of the front line and how the battle is going”.

After a hearty lunch, washed down with a nice bottle of claret, Charles “Half Pint” Carruthers walked to the hanger where his beige Airco DH.2 was kept and St John Featherstonehaugh went to the adjacent hanger and his olive green Airco DH.2. They taxied out, took off, climbed to 2,000 ft and flew towards St Crupelle. 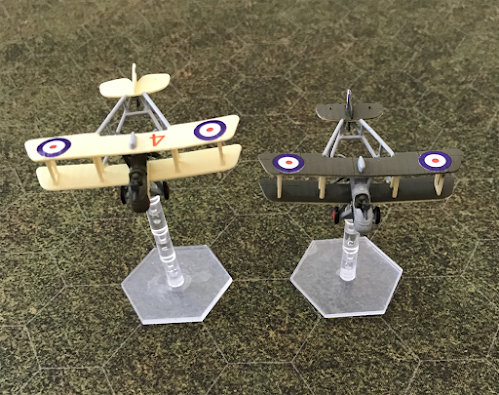 They knew that they would be fairly safe from small arms fire from both the enemy and their own infantry when above 1,500 ft. Soon after spotting the town and its canal, they saw two Hun scouts patrolling nearby. 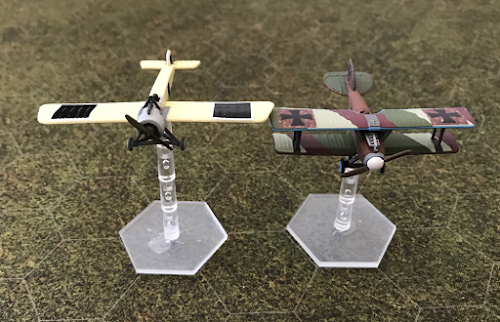 Udo Lockbach and Gaspard Hauser were patrolling over their advancing infantry in the vicinity of St Crupelle. Hauser had an old Fokker Eindecker monoplane and Lockbach had an Albatros D.I biplane, a new modern design. They stayed above 2,000 ft to avoid friendly fire and in the hope of finding a lone enemy two-seater.

The Hun in the Sun

We added a new rule for this game. If an aircraft is firing out of the sun then it gets the "aim bonus" and will do extra damage. This is because it isn't easy for the target to see the firer and thus has difficulty in manoeuvring so as to avoid the machine-gun fire. 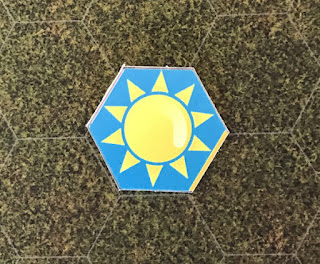 The sun marker shows the direction of the sun, which is fixed throughout the game.

Udo and Gaspard parted in what could have been a pincer movement.

Half Pint and St John could see eight different infantry units on the ground in front of them. Some of them were the Dampshires and some were German. They dived their DH.2's so as to give themselves a good chance of recognising friend from foe on the ground. 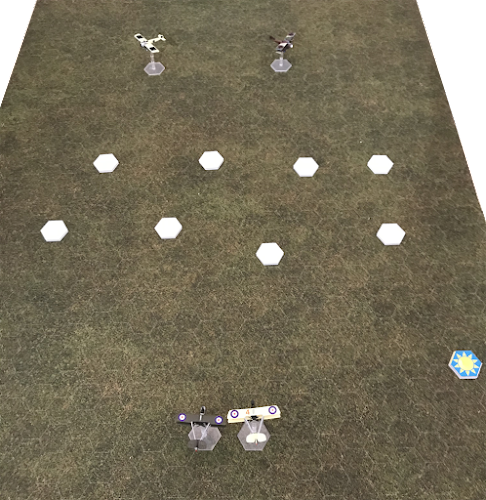 Half Pint and St John continued to dive, but at 800 ft they were still too high to see the troops clearly.

Udo dived his Albatros while Gaspard stayed at 2,000 ft in his Eindecker. 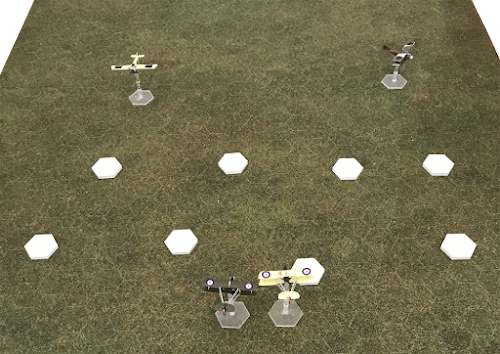 Half Pint and St John continued to dive, and now at only a couple of hundred feet they could see the troops clearly.

Udo in his Albatros turned in towards the British. Gaspard finally realised he was too high and started to dive his Eindecker. 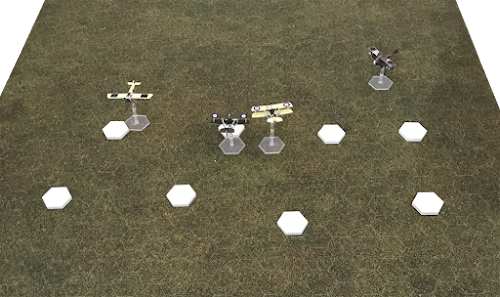 Gaspard realising he was still far too high, started to crash dive his Eindecker.

Both Half Pint and St John turned right and flew low over two infantry units. They could tell that these were infantry units, two companies of the 2nd Dampshire Regiment. Unfortunately for Half Pint and St John, the Dampshires hadn't had much experience at aircraft recognition, and both companies opened fire on the DH.2's despite the roundels on the underside of their wings.

Udo dived his Albatros down to the same height as the British, but in doing so missed an opportunity to open fire. 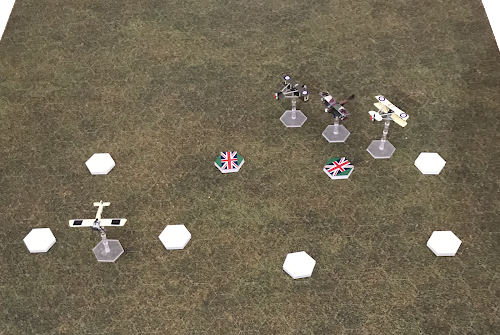 Gaspard turned in to chase the Brits. Udo got on Half Pint's tail and opened fire. 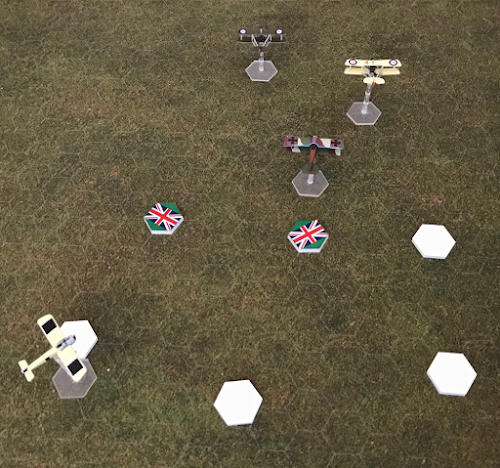 Half Pint performed a half-loop and St John a very tight turn. Both now had Udo's Albatros in their sights. They opened fire wounding Udo and damaging his aircraft.

Gaspard came racing in towards the dogfight and took fire from the Dampshire infantry. 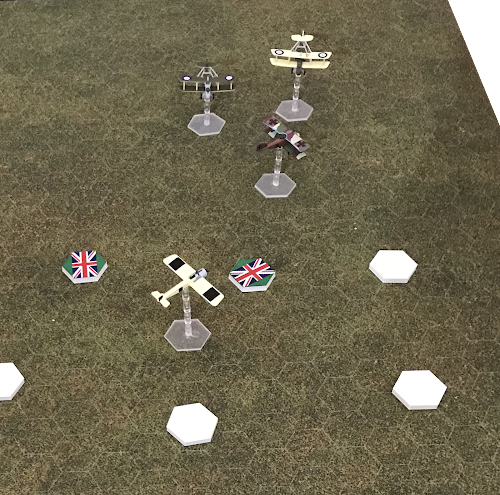 Udo in the Albatros went straight ahead out of the fight as Gaspard in the Eindecker came whizzing into the action and opened fire on Half Pint who's DH.2 was now more holes than canvas. 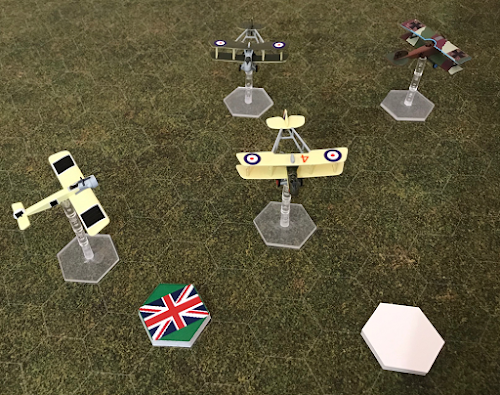 Udo turned sharply right and got behind Half Pint.

St John and Gaspard nearly collided, but both managed to get off a quick burst before the dodged each other missing by inches. 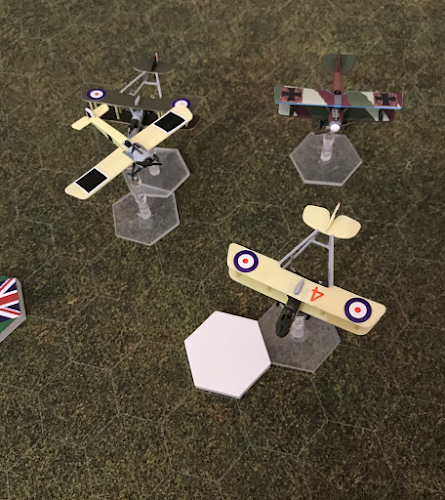 Half Pint had decided his badly damaged aircraft wouldn't hold out much longer, so he put his foot down and was streaking towards his own lines with the information on the Dampshire Regiment's location.

St John was still dogfight with the Huns and in what could have been a tricky situation. He had an Eindecker on his tail and an Albatros at close range to his left. Udo in the Albatros opened fire, but his machine-gun jammed immediately. 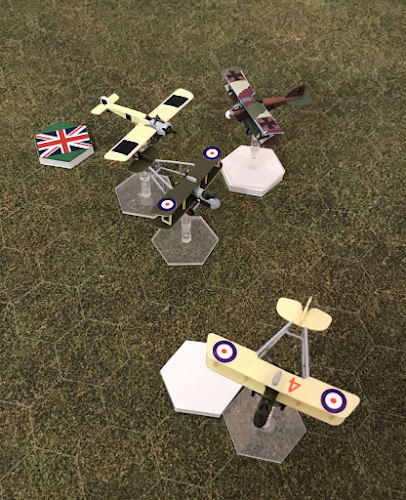 Although Gaspard in his Eindecker was on the tail of St John's DH.2, Gaspard couldn't fire because his machine-gun was jammed.

Half Pint was in the distance, heading towards home, but both the Huns gave chase. This gave St John a chance and he took it, he turned sharply and got behind Udo's Albatros, he opened fire but his machine-gun jammed. 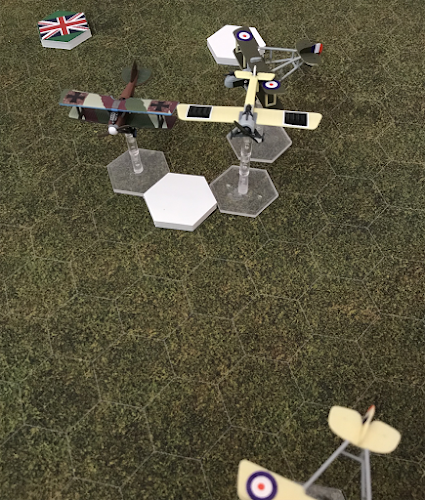 Half Pint could be seen in the distance, as the other three aircraft headed towards the British lines. 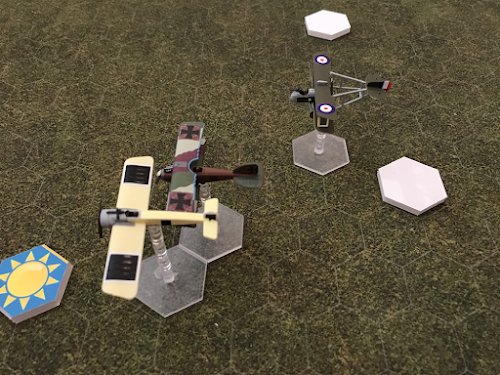 St John noticed that there were two Huns in font of him, so he turned his DH.2 away, as the Huns continued in vain to chase after Half Pint. 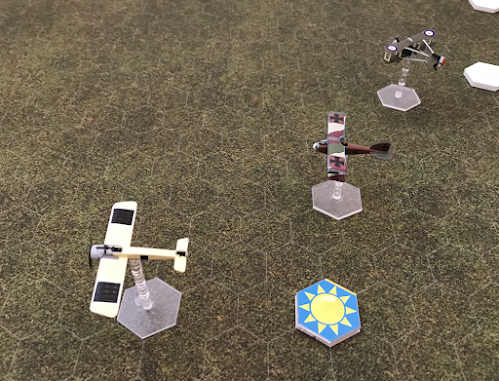 Seeing that the distance between the two Hun aircraft was opening, St John turned in to have another go at the nearest one: Udo's Albatros. 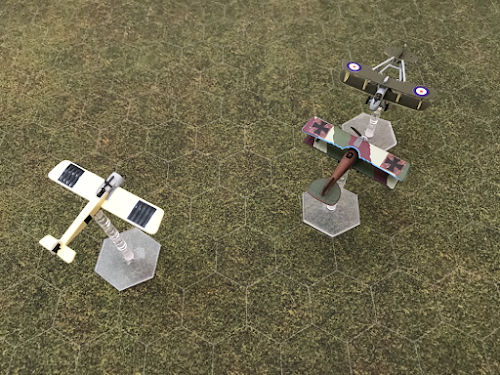 St John turned towards the British lines, but neither Gaspard nor Udo could reach him before the needed to turn for home due to lack of fuel. 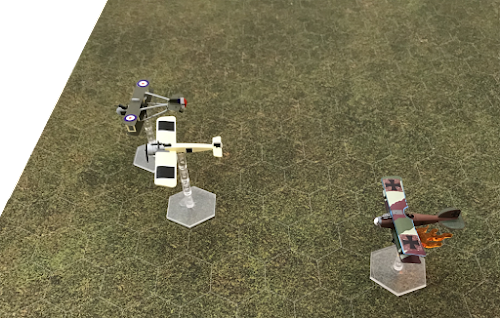 “Half Pint” and St John landed at a small strip near to Army HQ and reported the position of the companies of the 2nd Dampshire Regiment that they had located. When flying back to their own airfield, they flew over a huge cannon, the like of which neither had seen before.

Gaspard Hauser headed back to his aerodrome, to complain about his jamming machine-gun and to get more pistol ammunition for his Mauser. After landing he met Jörg Fritzl-Falconi, the Hungarian pilot, who, just the previous day, had suffered a horrible jam while dog-fighting with a Camel. "Scheisse!!" said Jörg, I am starting to think it really is "Sabotage!!".

The wounded Udo Lockbach decided that his fire damaged Albatros wouldn't make it back to the aerodrome, so he landed in a farmer's field right next to a small village. He climbed out, left the somewhat smoking aircraft, and walked into the village. There he found a small bistro with a rather attractive waitress. She tended his wound before serving him some local cuisine. Afterwards he hitched a lift back to the aerodrome. The next morning he woke up with a nasty case of food poisoning which would delay his return to flight duties.