This is the twentieth scenario in a Battle of Britain campaign that follows the exploits of the fictitious Country of Dampshire 369 Squadron Auxiliary Air Force. We use the Wings of Glory WW2 rules, slightly modified to give faster play, together with our own set of campaign rules. We use the Wings of Glory planes where the right model is available, other manufactures are used to fill in the gaps.

September 15th is the day that became known as Battle of Britain day. The Luftwaffe made an all-out effort to break the “last” resistance of the RAF, and the RAF responded by meeting them with larger fighter formations than they’d ever seen before. The Luftwaffe needed air superiority over southern England in order for the invasion to go ahead and they had failed to gain this. After the 15th, the weather went bad, Hitler cancelled the invasion preparations and the Luftwaffe went over to night bombing. Britain was safe from Invasion. 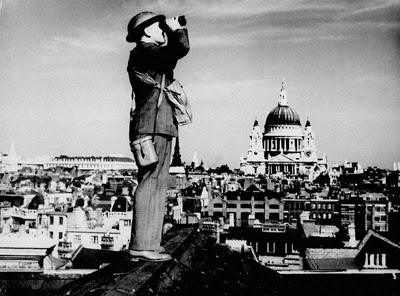 No. 369 Squadron had 4 pilots on standby, relaxing in the shade of their Spitfire's wings, when the scramble came to intercept two separate incoming bomber raids. Pilot Officers Emmett Hollingberry and Sir Price scrambled together to intercept the first raid. Pilot Officers Cholmondeley Featherstonehaugh and Percy Prune followed seconds after, heading for the second raid.

The Germans lauched a mission with two He 111 bombers led by Oberleutnant Hans von und zu Missendorff. The fighter escort was provided by Oberleutnant Freiherr C.G.Sommarlath and Leutnant Adolf Halland flying Me 109s. There was no second mission for 369 Squadron to intercept, it must have been a false echo on the RDF.

Hollingberry and Sir Price were quickly vectored onto the first raid. Featherstonehaugh and Prune could not make contact with the second; they suggested that maybe it had turned back or was hidden by clouds.

Sir Price in the lead, spotted the Germans in a tight formation with the bombers protected by the 109s.

As Sir Price and Hollingberry closed the enemy, they were spotted by the escorting fighters who headed out to meet them with Halland in the lead. 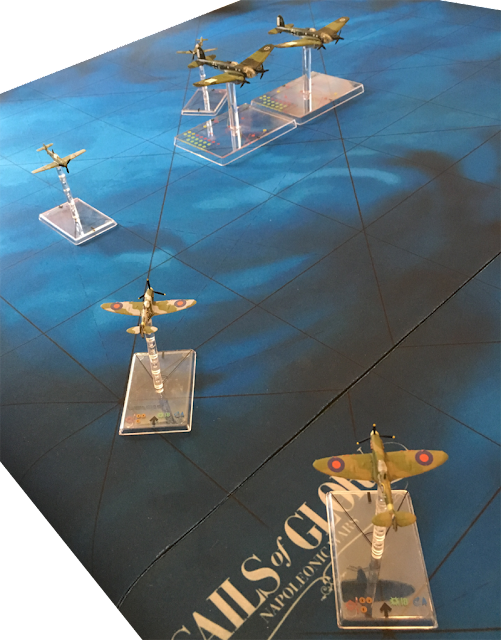 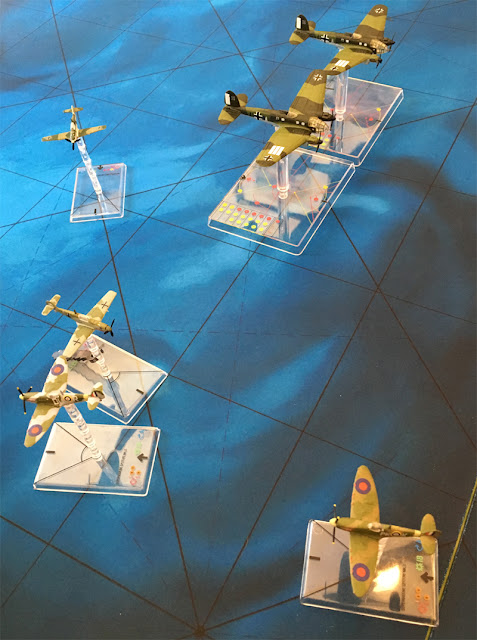 The bombers droned on and Hollingberry turned in to attack. He was caught in a crossfire from the bombers rear gunners and Sommarlath's 109. Even Hollingberry's engine started smoking. 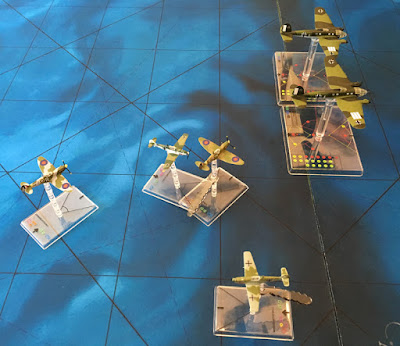 Seeing his friend Hollingberry in trouble, Sir Price jumped onto the tail of Sommarlath's 109 and opened fire. Hollingberry was too focused on the Heinkels to notice. 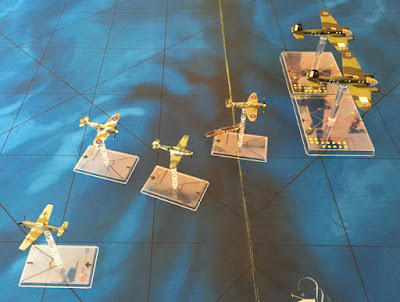 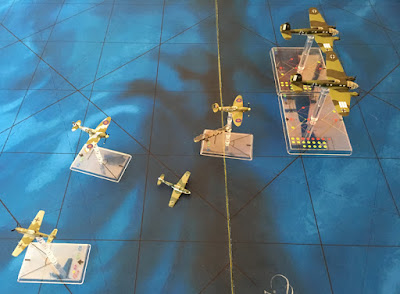 Hollingberry continued to attack the bombers, but was caught in a crossfire from their machine-guns and his Spitfire didn't stand a chance.

The somewhat damaged bombers headed into the clouds for protection and Halland in the remaining 109 was running short of fuel so he headed for home.

The two Heinkel He 111's droned on and came out of the clouds over the south coast of England.

Cholmondeley Featherstonehaugh and Percy Prume had not located the second raid, so they were vectored onto the first raid by their controller. Luckily for them, Hollingberry and Sir Price had already seen off the defending 109s. They split up and attacked the bombers in a pincer movement, something not to be found in the RAF's fighting instructions. 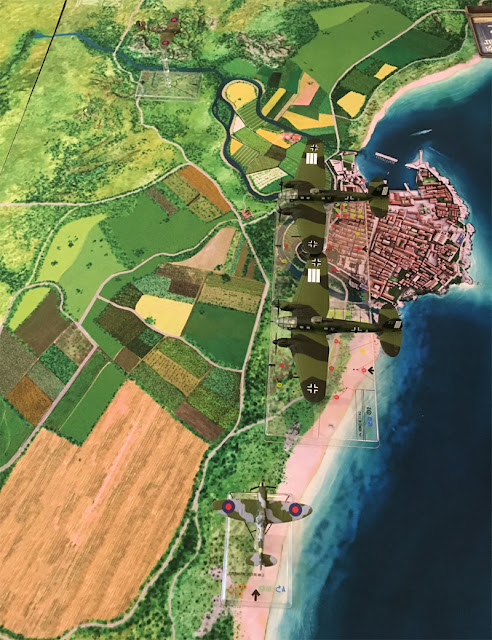 Prune got in close and dirty with the port Heinkel while Featherstonehaugh attacked his from a more normal distance. 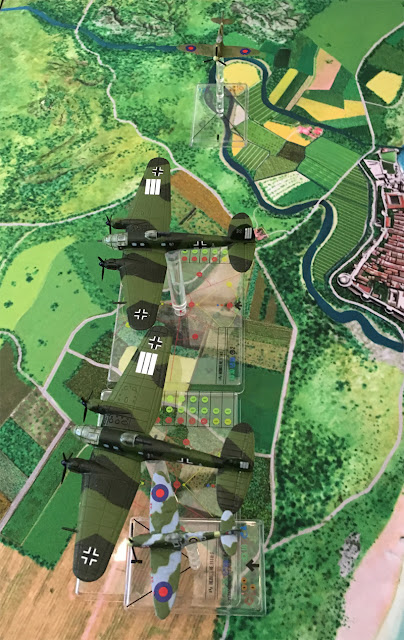 The bombers droned on with all their defensive guns firing. Prune was almost flying in formation, trying his best to shoot up his bomber's port engine. 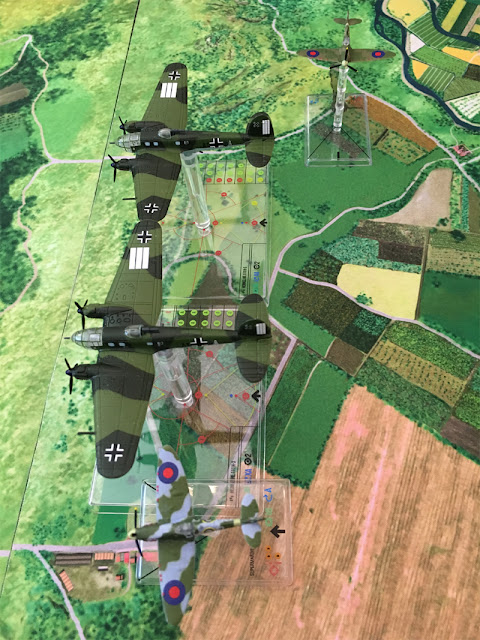 A lucky deflection shot by Featherstonehaugh did for the starboard Heinkel. 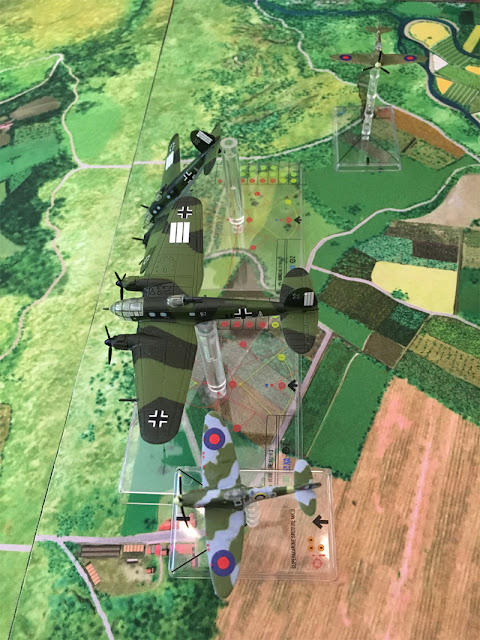 The remaining Heinkel was now set upon by both Spitfires. 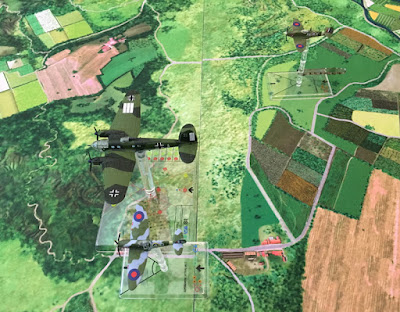 The lone Heinkel had no chance, and was soon diving out of control towards the farmlands of Southern England. 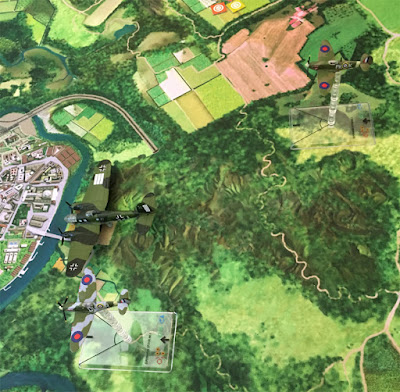 Oberleutnant Hans von und zu Missendorff and his four crewmen bailed out from his Heinkel He 111. They parachuted into a farmer's field where they were arrested by a passing police constable on his bicycle. They were first going to make a fight of it, but decided not to bother. Being captured wasn't a problem, they would be freed when the invasion started in a week or two.