Captain Jack "Casanova" Yates was still hungover after celebrating his successful rabbit hunt, so early the next morning it was up to Lieutenant William Algernon "Billy the Bishop" Tempest and his best friend Lieutenant Terence “the Rook” Turner to fly the dawn patrol. This was Turner's first mission over enemy territory. As usual, "Billy the Bishop" was flying a Camel with two red hearts painted on the top wing. The ground crew were trying to find out the reason behind these two hearts, but it remains a mystery to them.

In their Sopwith Camels, they took off from their aerodrome and headed eastwards into the rising sun. They crossed over the trenches and shortly thereafter spotted two Fokker D.VIIs in the distance. 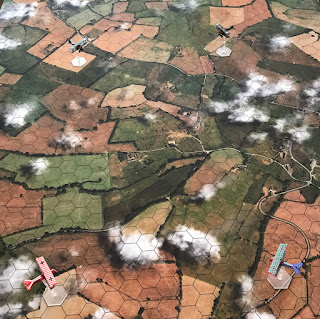 Turn 1:
The Huns decided that they would attempt to stay to the left of the Camels. 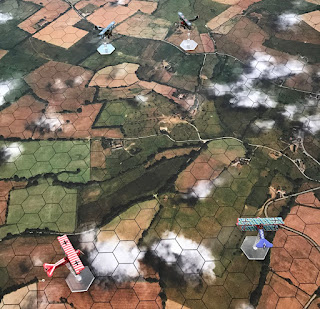 Turn 2:
The Camels closed up their formation. 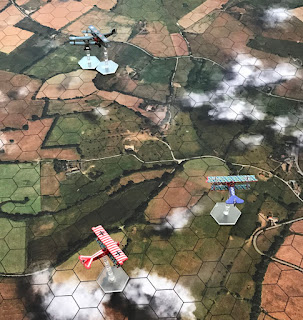 Turn 3:
Even the Huns closed up their formation, as Billy the Bishop led Terrence the Rook into the fight. 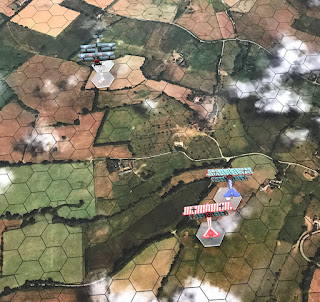 Turn 4:
The Huns turned in towards the Camels, happy to be on their left side. 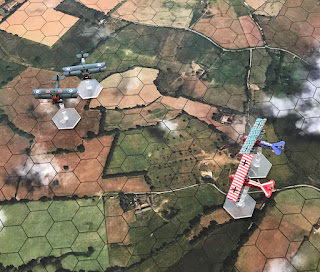 Turn 5:
Even the Camels turned in and the adversaries met head-on. 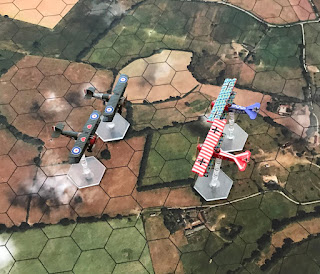 Both Camels opened fire on the Red Fokker at long range.

The Fokkers returned the fire, both aiming at Terrence the Rook, whose Camel burst into flame. 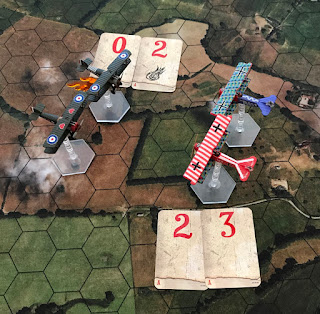 Turn 6:
The dogfight continued with the Red Fokker flying right in front of Billy the Bishop's Camel. 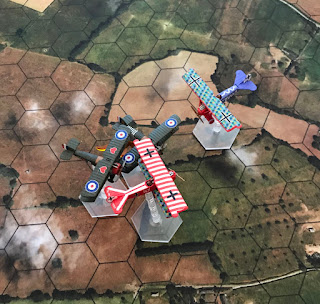 Billy opened fire on the Red Fokker wounding the pilot.

The Blue Fokker opened fire on Terence, the machine gun fire and flames together doing nasty damage to the Camel. 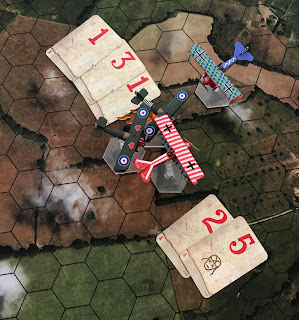 Turn 7:
Both Terence and the Red Fokker managed to dodge away from their adversaries, but Billy and the Blue Fokker met head on. 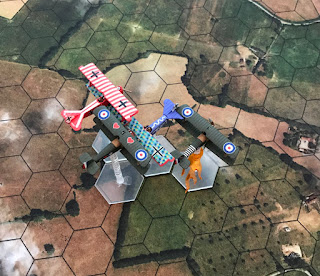 The Blue Fokker made some nasty holes in Billy's Camel, but his return fire did greater damage to the Blue Fokker, its engine started smoking and making strange screeching sounds. The flames from the engine of Terence's Camel were burning holes in its fuselage. 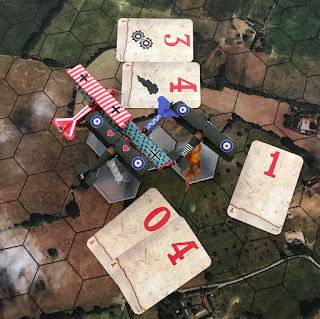 Turn 8:
The two Camels performed 180-turns but the Huns both turned in towards them. 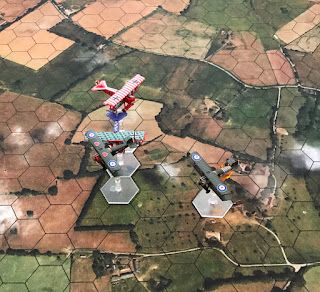 The Blue Fokker opened fire on Billy, and now even his engine started to make worrying noises. The Red Fokker took a long range pot-shot at Terence, but his machine-guns did less damage than the flames shooting out from the Camel's engine. 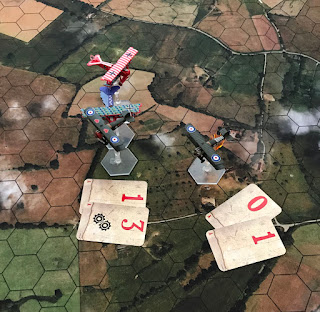 Turn 9:
The Blue Fokker turned onto the tail of Terence's Camel, but the smoke coming from his engine hampered him from getting a really good shot. Even the Red Fokker managed a long range shot at Terence, before being himself shot at but Billy. 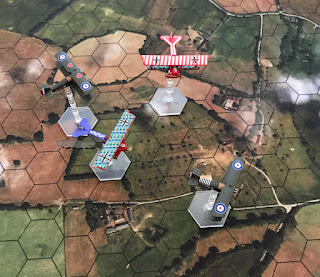 Billy's burst of fire did no damage, and then suddenly stopped as his guns jammed.

The two Fokker's shot nasty holes in Terence's Camel, but even the Blue Fokker's guns jammed. 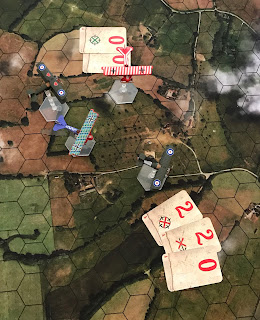 Terence's Camel could withstand no more damage, it crashed into a field quite a way behind enemy lines, and yet again burst into flame. 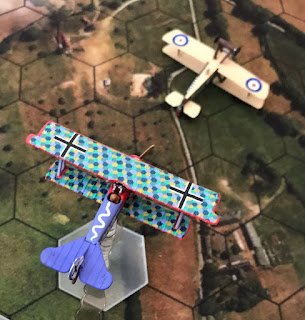 Turn 10:
The Fokkers started to head away from the fight as Billy tried frantically to unjam his guns. 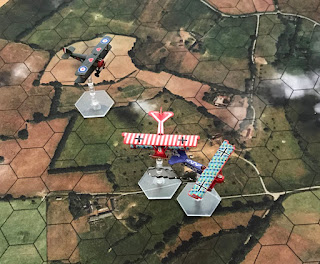 Turn 11:
The Blue Fokker headed away from the fight.

The Red Fokker, thinking that Billy would get on his tail, so despite his badly damaged Fokker he performed an Immelmann turn. However because of his wound he misjudged the Immelmann and went into a spin.

[House rule: a wounded pilot must test for entering a spin after performing an Immelmann turn. Roll a D6 each turn and rotate the aircraft that many hex sides clockwise. Each turn in a spin take an A damage card. Test at the end of the turn to exit the spin.] 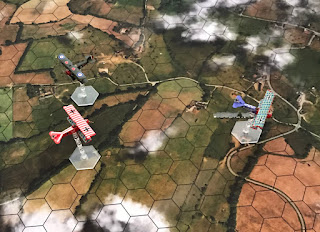 The damaged Fokker could not handle the forces of a spin, its wings fell off. 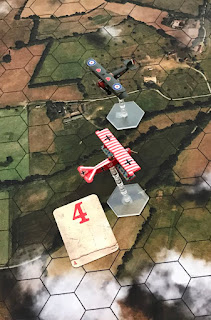 William "Billy the Bishop" Tempest saw the Hun pilot balls up the Immelmann turn and go into a spin, so Billy decided to claim it as his own kill. 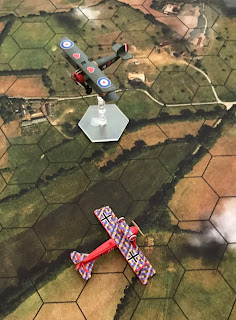 Having seen off the Huns, Lieutenant William Algernon "Billy the Bishop" Tempest found the field into which Lieutenant Terence “the Rook” Turner had crash landed. It wasn't that hard to locate, because of the plume of black oily smoke spiralling up from Terence's Camel. As hew flew slowly across the field, he saw Terence, in a rather singed flying suit and helmet, waving at him. Billy brought his Camel round sharply and put it down next to Terence who ran up to the Camel.

There then ensued a long and heated discussion about who would sit on whose lap in the cockpit! This was quickly resolved when Billy noticed some German infantry running towards them. Terence jumped onto the port wing, as near as possible to the wing root, and grabbed hold of the forward edge. Billy accelerated across the field and despite the bumps that nearly shock Terence off and the pot shots from the German infantry, he lifted safely into the air.

They flew slowly, at treetop height back to their aerodrome and landed safely. They went immediately to the Officers' Mess to celebrate, there they found Captain Jack Yates relaxing in a rather dilapidated old Chesterfield armchair with a whiskey in his hand. The Captain was so happy to see that Terence hade survived his first mission against the Hun, that he presented him with a new leather, rabbit fur lined, flying helmet to replace his old flame-damaged one.