This is the eighth episode of a campaign representing fictitious battles in the air over the Western Front during the First World War. It was initially planned to use the Wings of Glory rules, but these were modified to use hex based movement in order to facilitate remote play over the Internet due to Corona restrictions.

All the pilots had taken their places, Major Brackton addresses them, “Gentlemen. The German offensive at St Crupelle continues without slowing down. Day by day, step by step, the British and Canadian forces have been pushed back. Now only two small bridgeheads remain on the northern shore of the Juliana Canal; in the ruins of St Crupelle itself and at lock no. 9. The Dampshire Regiment has managed to resist repeated attacks, but in recent days, an increasingly accurate fire from long-range cannons has prevented reinforcements from reaching the two bridgeheads. In addition to these two bridges, all crossings have been blown up by our engineering troops. These two positions are therefore of utmost importance! If the Germans manage to throw us back across the canal, our counter-offensive will be much more costly than if we can launch the offensive from the north bank of the canal. ”

Major Brackton continues, "And now we come to you. The reason why the German artillery fire is so accurate is the balloons they use for fire control. As long as the Germans can use those balloons, our troops cannot save the bridgeheads - and then it's only a matter of a few days before they fall. We have therefore been assigned the rocket expert Captain Tsiolkovsky of the Imperial Russian Air Service, who has developed a new, more effective rocket weapon to shoot down balloons! ”

Out of the shadows rises a tall slender man with a cold piercing look and a huge moustache - "Da sssvedanya sssuckersss!" 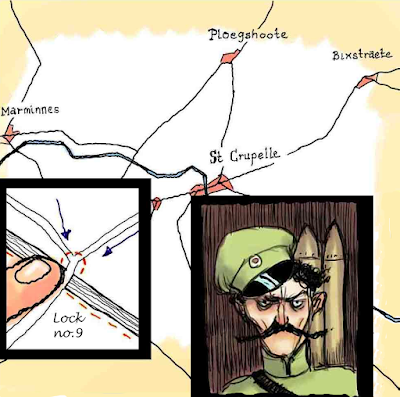 Captain Tsiolkovsky takes off in his rocket-armed Nieuport 16 accompanied by a British Airco DH.2 piloted by “Dirty” Bertie Parker, they climb to 1,500 ft and head towards St Crupelle.

Circling above the town, at 1,700 ft they spot a Halberstadt D.III flown by Udo Lockbach and an Albatros D.I flown by Gaspard Hauser.

Captain Tsiolkovsky spotted the balloon ahead of him, but also saw that their was a light anti-aircraft gun in front of the balloon to protect it.

As soon as the German balloon detachment spotted the enemy aircraft, they rushed to their winch lorry in order to pull down the balloon to safety. 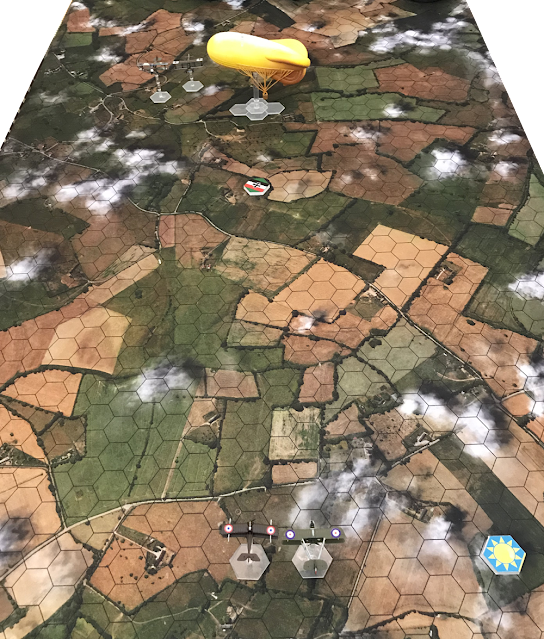 Lockbach and Hauser headed towards the enemy.

Captain Tsiolkovsky turned right to distance himself from the Germans and get a clean run at the balloon.

“Dirty” Bertie Parker turned left towards in approaching Germans to place his DH.2 between them and Tsiolkovsky's rocket-armed Nieuport 16. 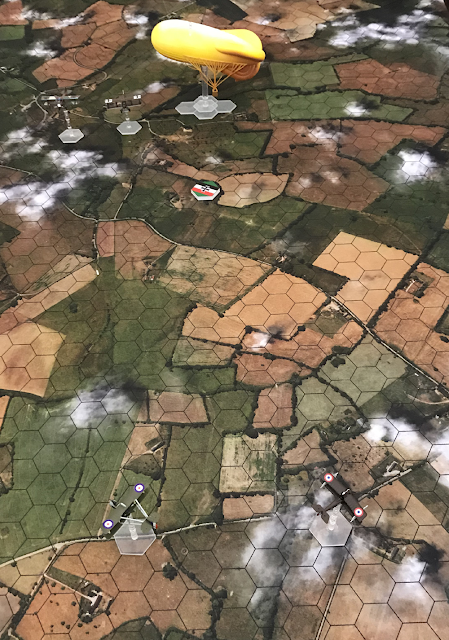 The Germans continued heading towards the enemy with Hauser in the Albatros D.I now taking the lead.

“Dirty” Bertie Parker turned in to face Hauser. Tsiolkovsky turned his rocket-armed Nieuport towards the balloon while hopefully staying out of range of the archie. 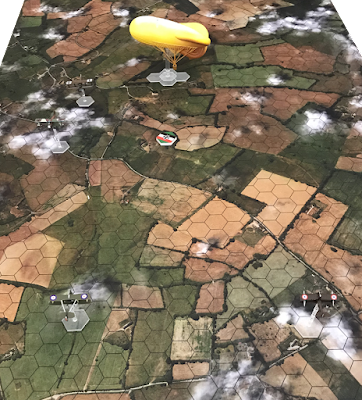 Hauser in his Albatros D.I continued straight ahead, diving down to the same altitude as the Engländer.

“Dirty” Bertie Parker slipped his DH.2 to the left, in order to confront Hauser.

Tsiolkovsky in his rocket-armed Nieuport continued straight towards the balloon while carefully staying out of range of the archie.

Lochback turned his Halberstadt D.III right, away from the incoming enemy. 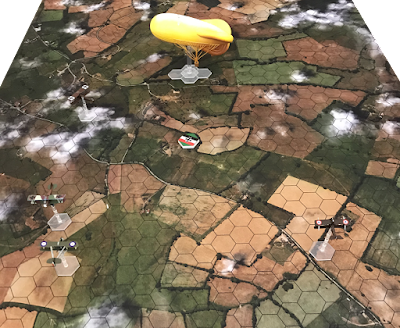 Hauser and Parker opened fire on each other. A bullet from Parker's Lewis gun caused Hauser's Halberstadt to burst into flame. 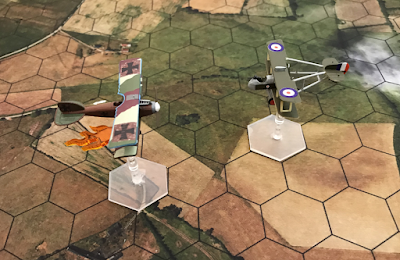 Tsiolkovsky in his rocket-armed Nieuport continued straight towards the balloon while carefully staying out of range of the archie.

Lochback continued to turn his Halberstadt D.III right, away from the incoming enemy, was he perhaps plotting a cunning trap? 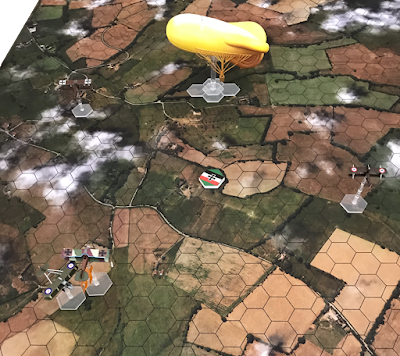 Tsiolkovsky turned his rocket-armed Nieuport right for his final run-in at the balloon. 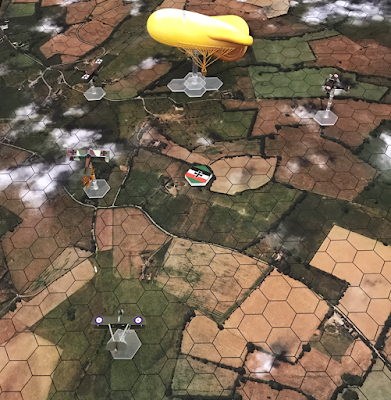 Flying his Nieuport dead straight to get a good aim, Tsiolkovsky fired off all eight of his le Prieur rockets at the balloon. He had bravely, if not somewhat foolhardily, waited until the last possible instance before firing. If the balloon exploded, his Nieuport would be engulfed in the flames. Two of his rockets hit the balloon and it burst into flames, but luckily for Tsiolkovsky it didn't explode.

Lochback in the Halberstadt D.III  head towards Tsiolkovsky, but came with range of the archie which mistook his plane for an enemy plane and opened fire.

Hauser in his Albatros D.I went straight ahead, now being chased by "Dirty” Bertie Parker in his DH.2. 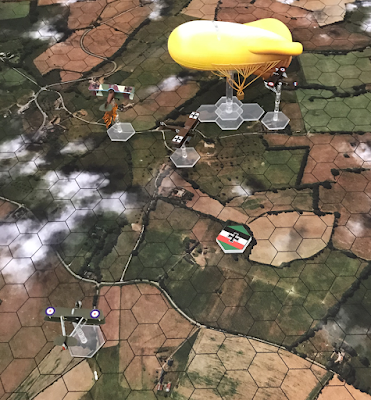 Hauser had managed to extinguish his flaming Albatros, turned right and opened fire on Tsiolkovsky. The bullets from his lMG 08 machine gun hit the Nieuport's engine and it started to splutter.

"Dirty” Bertie Parker continued to chase Hauser, but the necessity of avoiding the archie delayed him.

Lockbach turned left towards the balloon, luckily for him the archie realised its mistake and stopped firing. 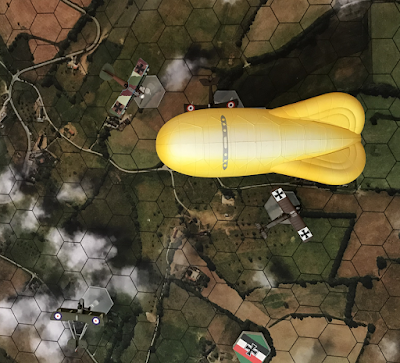 Tsiolkovsky turned right, leaving the balloon burning merrily behind him.

"Dirty” Bertie Parker turned in towards the balloon and the enemy aircraft.

Expecting Tsiolkovsky to continue machine gunning the burning balloon, Hauser and Lockbach turned tightly in to protect it. 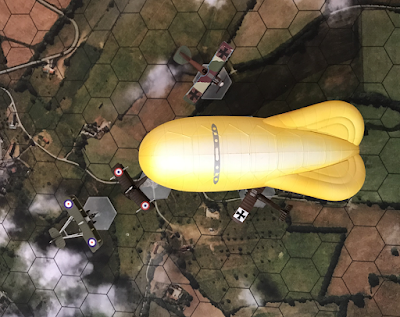 His engine spluttering and his machine gun jammed, Tsiolkovsky turned his Nieuport for home.

Parker and Hauser open fire at each other.

Lockbach turned left away from the balloon. 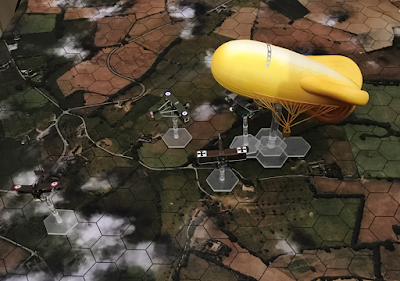 Yet again, Parker and Hauser opened fire at each other, but surprisingly both their machine guns jam!

Lockbach turned back towards the balloon. 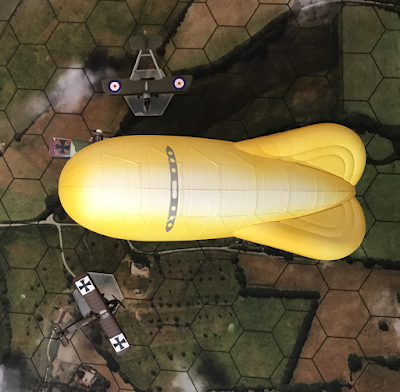 Tsiolkovsky was now out of sight and well on his way home. With his machine gun jammed, and facing two enemy, Parker decided to try and gracefully exit the fight and leave the balloon burning behind him. 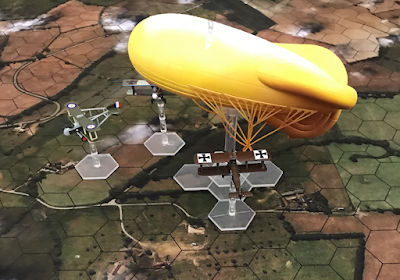 Hauser chased after Parker but misjudged the turn and he lost Parker.

Lockbach turned left and got in a parting long range burst at Parker.

Parker dived and headed for home. Hauser and Lockbach attempted to catch him but neither had enough speed to overtake him. 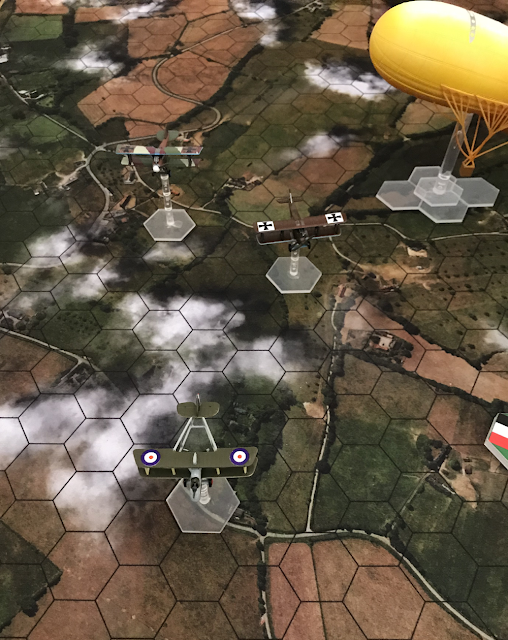 Heading for the aerodrome, Captain Tsiolkovsky pulled out a bottle of Imperial Golden Vodka from under his seat were it had been safely stowed. He pulled out the cork with his teeth, and spat it out over the side of the cockpit. He proceeded to drink the vodka during the flight home. Tsiolkovsky had never really mastered the art of landing his aeroplane, but somehow after a taste of the Imperial Golden, this didn't seems to matter. And at least most of the time, the erks could fix the landing damage anyway!