This is the first episode of a campaign representing fictitious battles in the air over the Western Front during the First World War. It was initially planned to use the Wings of Glory rules, but these were modified to use hex based movement in order to facilitate remote play over the Internet due to Corona restrictions.

The formation of the squadrons

Early Spring, 1916. Both sides' armies try new measures to preserve the fighting spirit in the war-weary homelands. The latest idea is to strengthen solidarity within the alliances by putting together international air squadrons, whose adventures the newspapers eagerly report on. A whimsical coincidence has placed the "Premier Escadrille International" and the "Kaiserliche und Königliche und Kaiserliche Jagd-Schlachtstaffel" directly opposite each other. Neither of these multinational squadrons has a clue about the complicated and intricate stories they are about to experience.

After long and heated discussions, France has agreed that the squadron is to be led by an Englishman, the hard-nosed Major Brackton. This is a victory for England, but a victory that could only be won by accepting the appointment of a French inspector to investigate how efficiently the squadron works. This system does not bode well for the future – Inspector St Prix has, even before the squadron carried out its first mission, directed devastating criticism at Major Brackton's way of leading the squadron. Criticism that could ruin Brackton's further career. Aggravating the situation, there are rumors that several of the American and Canadian the pilots may have been recruited by a German spy, “Fräulein X”, operating on the passenger ships that brought them across the Atlantic. Even among Europeans, there are individuals worth watching. Sous-Lieutenant Foudrelle writes extensively in his notebook - poetry, he claims - but why may nobody see it? And who is the shadow that Lieutenant Lugeau has seen sneaking around after dark?

If the situation is worrying and chaotic on the Entente Powers’ side, then it is even more worrying and confused on the Central Powers’ side. Squadron Commander Fritz Detterman thought he had encountered most things during his years in the colonial police in German South West Africa, but already after a few days at the new the squadron, he faces a series of strange questions. General Schmidt stopped by to say hello and good luck to him. An hour after he’d left, he telegraphed that he had forgotten his bag containing the plans for the Christmas offensive at the squadron - but here no one knew anything about any bag. Was there then reason to believe the rumours that allied spies had succeeded in infiltrating the newly formed squadron? Maybe one of the pilots from Austria-Hungary's unruly small nations, the ones with strange names? And speaking of strange pilots - who actually is the young pilot with memory loss appeared that this morning at the squadron? All he had with him was a pilot's license issued to "Gaspard Hauser", an identification badge of the same name and a backpack with a bible and a pickled sausage. And finally, who are the two identical men who both claim to be the heirs of Sachsen-Zenda?

Spring 1917 – The Premier Escadrille International has been tasked with photographing the bridge over the Mosel at Rettel across which a large number of Hun supplies and reserves are passing. To do this they have been allocated a new Bristol F.2B Brisfit two-seater. It has modified to carry a camera with a newly developed lens capable of taking detailed photographs from 15,000 feet. They will be escorted by one of the squadron’s Sopwith Camel scouts. Charles “Half Pint” Carruthers will fly the Brisfit with “Dirty” Bertie Parker as his observer and cameraman. Captain Jack Yates will be escorting them in his Camel. It takes 20 minutes to climb to altitude before heading towards their target. 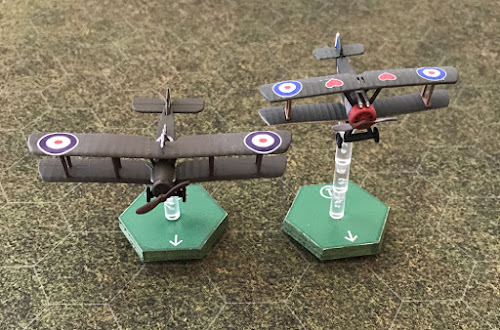 They keep a good lookout because it is known that the Kaiserliche und Königliche und Kaiserliche Jagd-Schlachtstaffel is flying patrols in the area with their Albatros scouts. 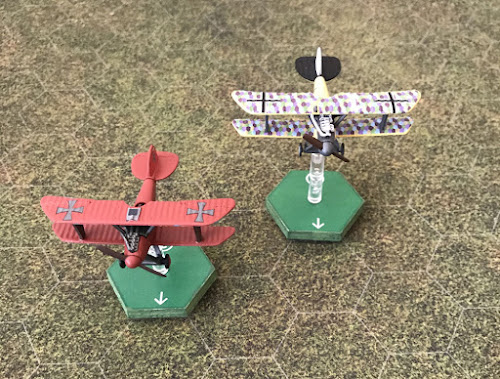 The Germans had taken off from their aerodrome and were now patrolling over the Meuse bridge at just over 15,000 feet. The patrol was led by Udo Lockbach in his blood red Albatros D.III with the Erbprinz Rupprecht zu Sachsen-Zenda as his wingman flying an Albatros D.V.

Captain Jack Yates in the Camel (1) spotted the bridge and at the same time noticed the two Huns patrolling nearby. He waggled his wings to alert Half Pint in the Brisfit (2). 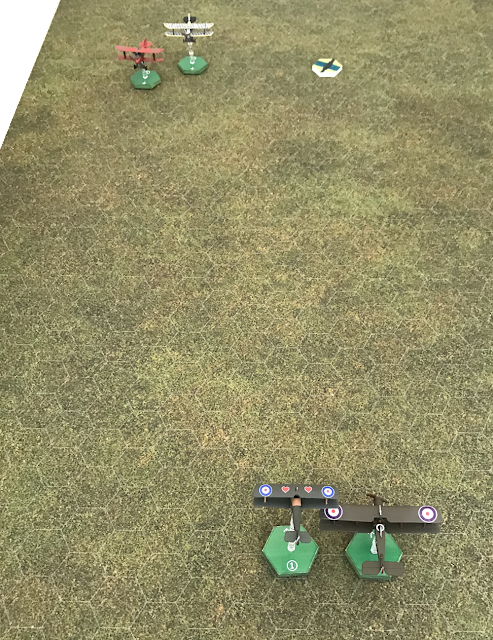 Udo Lockbach in the red D.III (3) flew straight ahead while Sachsen-Zenda in the speckled D.V (4) slipped left. Yates and Half Pint headed straight towards the bridge.

Half Pint decided there and then on his tactics, he would head straight for the bridge to get there as soon as possible while maintaining height and then once Parker had photographed the bridge he would turn for home diving in order to gain speed and hopefully outrun the Hun. 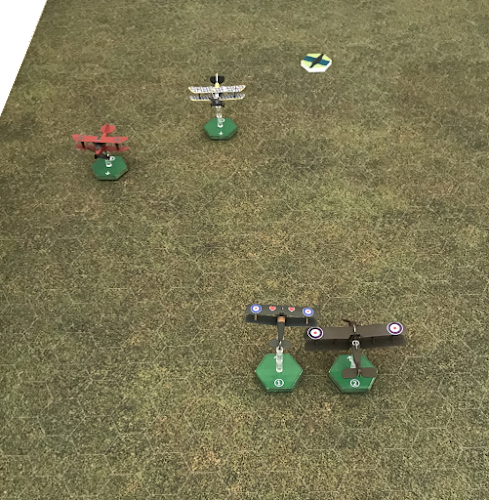 True to his plan, Half Pint in the Brisfit headed straight towards the bridge. His observer, “Dirty” Bertie Parker, had been gesticulating at Yates in the Camel. Yates totally misunderstood this, and turned tightly to the left.

Sachsen-Zenda in the speckled D.V attempted to dive down on the Brisfit and at the same time turn towards it; this unfortunately for him, caused the Albatros to enter a spin.

Udo Lockbach in the red D.III, having predicted that the Brisfit would continue straight for the target, turned in toward it and opened fire. 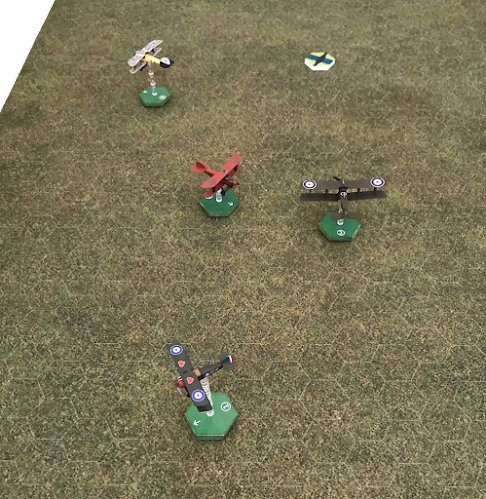 Somewhat luckily, Sachsen-Zenda recovered from his spin and turned back toward the fight, climbing slowly to regain height.

Evan Yates, realising his mistake, headed back toward the fight.

Half Pint disliked being shot at and decided that his original plan wouldn't work. Instead he slipped the Brisfit in towards the red Albatros hoping that the Hun would overshoot and that Parker in the rear seat would get a good shot.

But Udo Lockbach in the D.III was sneaky, and he turned tightly and ended up on the Brisfit's tail at close range!

Udo Lockbach opened fire doing good damage from the tailing position. Luckily for Half Pint and Parker Udo hadn't managed to position his Albatros in the blind spot created by the tail assemblage, so Parker returned fire with his Lewis Gun. His first couple of bullets hit a fuel line and flames could be seen coming from the Albatros. But before Parker could finish off the Albatros, his gun jammed! 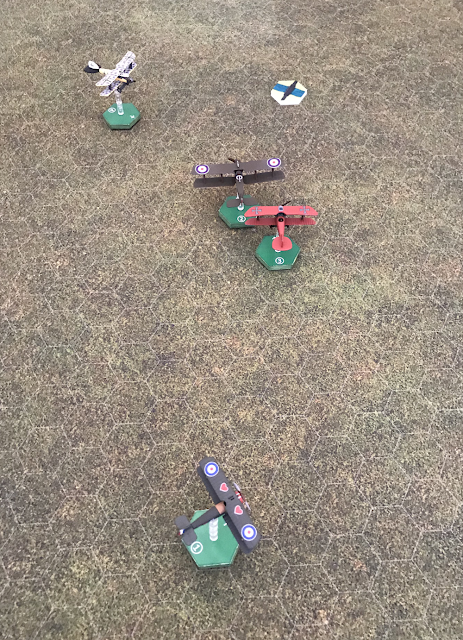 Both Albatros scouts headed toward the bridge where they expected the Brisfit to be. But Half Pint had decided that the bridge was a little to hot for comfort and he turned left giving Parker a chance to unjam his Lewis and hopefully time for Yates to return to the fight. 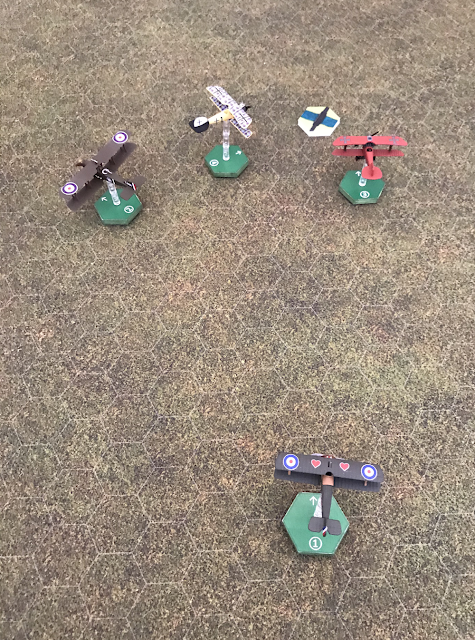 Both Albatros scouts, realising that they had missed the Brisfit, turned back towards it.

Half Pint turned sharply right towards the bridge and got in a quick shot at Sachsen-Zenda in the D.V while Parker in the rear seat was unjamming the Lewis and attempting not to be thrown out of the violently manoeuvring aircraft. Half Pint's shot was a lucky one, and smoke started pouring out of the D.V.

Yates had now got the Camel up to full speed, and was heading back into the battle. He opened fire on the red D.III and damaged the tail fin. It would take a while before the D.III could turn left. 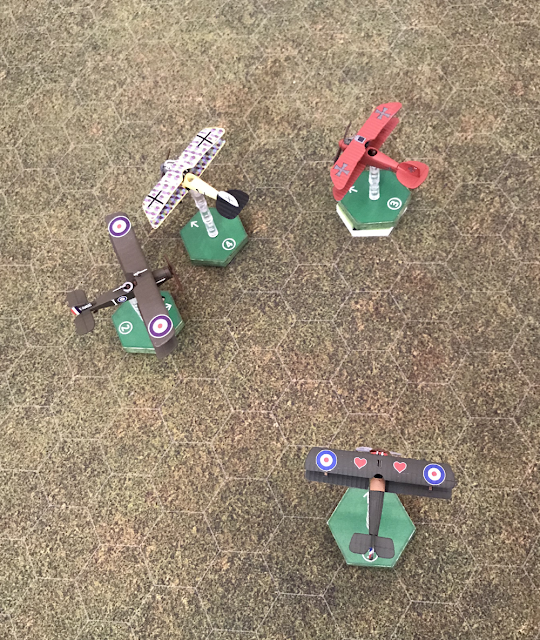 Yates in the Camel was now back in the fight, he opened fire on the smoking D.V.

Half Pint flew a straight run in toward the bridge to give Parker in the rear seat a good shot with the camera. Parker did his duty and took the photograph, despite being severely tempted to pick up his Lewis and shoot at the circling red Albatros. 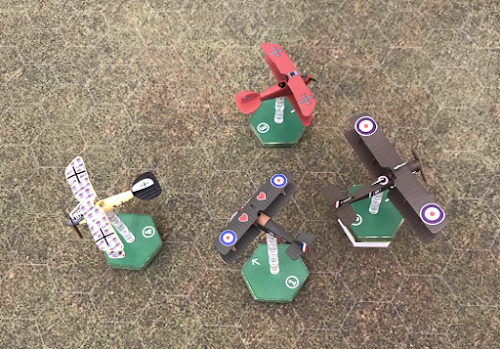 Sachsen-Zenda, in the damaged and smoking D.V, headed for home.

The Camel and the red Albatros were circling round each other, trying but failing to get any good shot.

Half Pint in the Brisfit had also decided that it would be wise to head for home, both Albatros scouts had made nasty holes in his new Brisfit. Parker in the back seat, fired a Parthian shot at the D.III. This shot hit Udo's engine causing it to loose power.

Realising that the D.V had left the pitch, Half Pint decided to have another go at the lone red Albatros before play ended so he turned back.

With both engine damage and fire damage, Udo in the red Albatros decided that discretion was the better part of valour and turned to follow Sachsen-Zenda's D.V home to their aerodrome.

Yates had turned his Camel tightly to the right, and whether by skill or fluke, had ended up on Udo's tail. 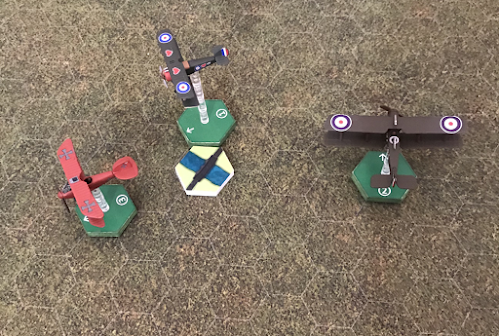 Yates's shot was at long range, but yet again Udo's engine was hit. The engine seized up immediately. 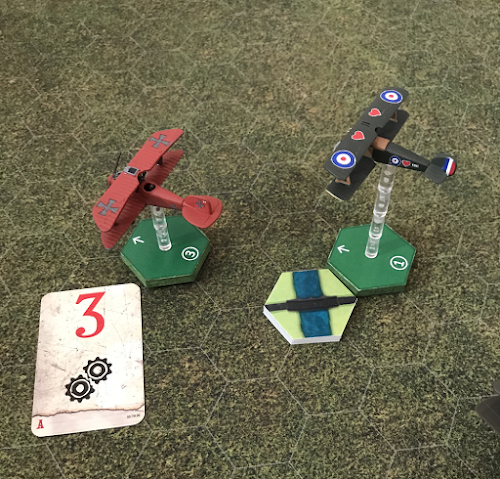 Udo put his D.III into a dive and glided down. He performed a dead-stick landing in a farmer's field near to the bridge. He was feasted in the officers’ mess of a Prussian infantry regiment who wrongly believed that Udo had stopped die Engländer from bombing the bridge while they had been marching across it. He was returned, on horseback, to his aerodrome early next morning with a huge headache.

When the photographic plate was developed, Charles “Half Pint” Carruthers and “Dirty” Bertie Parker were treated to a slap up meal in the officers' mess by their Squadron Leader, Major Brackton.