Age of Sail - Get the Treasure Home

I have been working on a modified set of hex based naval rules (called KAOS) for fighting medium sized Age of Sail battles on hexes based on the old Avalon Hill Wooden Ships & Iron Men rules and using ships from the Sails of Glory range. I have also a set of campaign rules (KAOS CAMP) which can be used to follow the adventures of the captains through the scenarios.

Because of the Corona situation, the battle was fought via a Skype link. I plan to use a playing area with 40 mm hexes but for this test, under Corona-isolation, I used the grass green 35 mm hex playing are that I had readily available and hastily made ship bases.

British briefing:
After the capture of the treasure galleon, a Spanish 74 named Nuestra Señora de las Nieves, the frigates PHEOBE and DRYAD escorted the captured Spaniard northwards towards England while the CAROLINE headed off on a separate mission. The  treasure galleon had only a skeleton prize crew, with the Spanish crew confined in the hold without their officers. The ships passed the Groyne and headed out into the Bay of Biscay. As they neared soundings somewhere WSW of Scilly they sighted two strange sail ahead. These sail turn out to be two French 38-gun frigates patrolling.

French briefing:
You are patrolling the western entrance to la Manche, North-West of Île d'Ouessant in the 38-gun frigate Hébé with her sister ship Sibylle in company, when you spot three sail coming up from the South-West. You identify the first two sail as British 36-gun frigates and the third sail as a much larger vessel, probably an East Indiaman and as such a very nice prize indeed.
The British frigates HMS PHEOBE (4) and HMS DRYAD (9) followed by the captured treasure galleon, Nuestra Señora de las Nieves(2), were broad reaching under easy sails with the wind from starboard.
The French frigates Hébé (11) and Sibylle (12) were broad reaching under easy sails with the wind from larboard. They could now see that the third British sail was not an East Indiaman, but instead a rather battered Spanish ship of the line.
They started 14 hexes apart, well out of cannon range. The wind marker shows the wind blowing from the bottom of the picture.

1)
The French frigates continued to close with the British.
PHEOBE reduced speed in order for DRYAD to close up the gap. 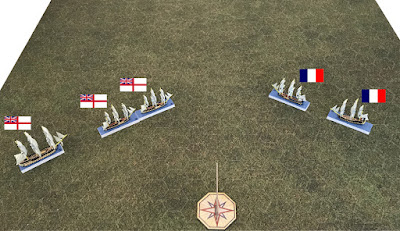 2)
Hébé, PHEOBE and DRYAD turned downwind, Hébé and PHEOBE exchanging broadsides as the did so. 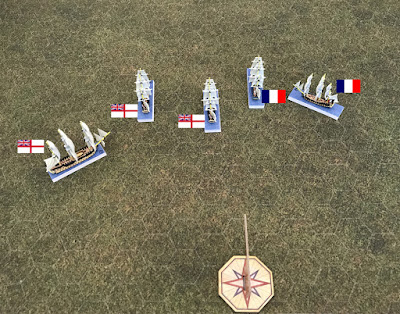 3)
Sibylle followed in the wake of Hébé. Both French frigates opened fire. 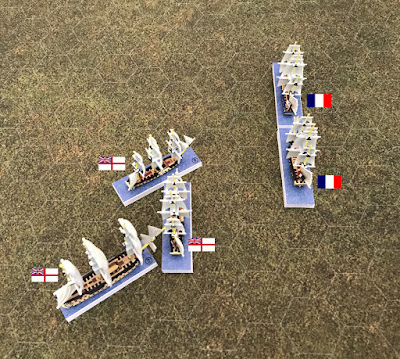 4)
The British frigates PHEOBE and DRYAD collided and fouled their rigging.
Hébé with Sibylle still followed in her wake, turned in front of the British and opened fire. Sibylle's fire raked DRYAD. 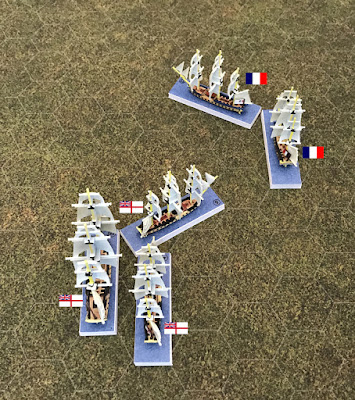 5)
PHEOBE and DRYAD attempted to un-foul their rigging.
The Spanish treasure galleon was raked by Hébé, while Sibylle continued to fire into DRYAD. 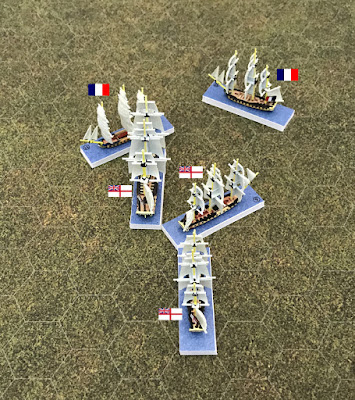 6)
Hébé boarded the Spanish treasure galleon and a melee was fought. Sibylle continued to fire into DRYAD.
PHEOBE and DRYAD attempted to un-foul their rigging. 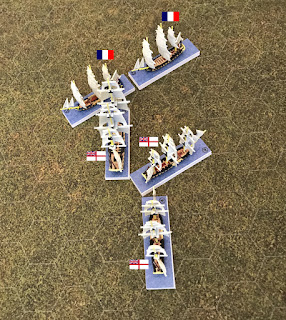 The seamen now spotted that a change in wind was on its way, the wind was going to veer.
7)
PHEOBE and DRYAD drifted downwind while still attempting to un-foul their rigging.
Sibylle continued to fire into DRYAD.
Hébé's crew, aboard Nuestra Señora de las Nieves, released the Spanish crew from the hold and the opened fire on the DRYAD. 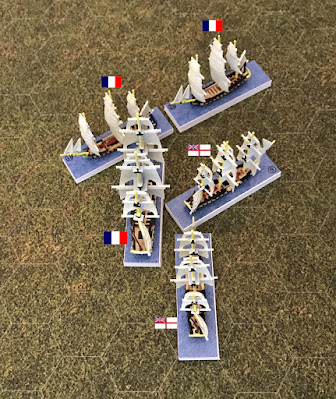 The wind now changed direction, veering 120 degrees. The wind now blowing from the top left corner of the picture. 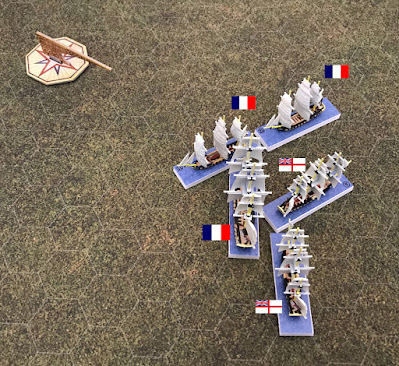 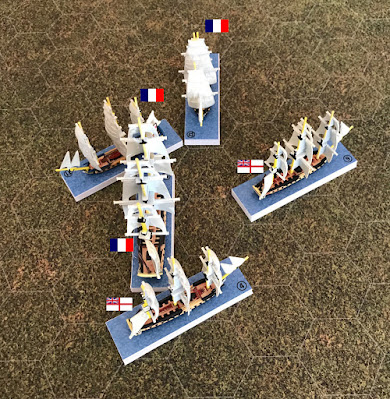 9)
PHEOBE, now with full sails set, moved out the the French ships' arcs of fire. 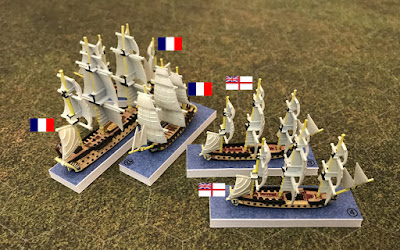 Sibylle boarded and secured the DRYAD. Hébé's crew secured the Spanish prize.
The French watched as the PHEOBE disappeared into the distance towards England, two prizes were enough for the French, they let PHEOBE escape.
The French sheeted home and headed for the naval base at Brest.
Posted by Keith at 6:11 PM