Time for a dungeon crawl using tiles from DMB Games and the Swords and Wizardry “Old School D&D” rules.

The party consists of 6 second-level adventurers: a human cleric, a hobbit thief, a human paladin, a dwarf fighter, a human ranger and a half-elf magic-user.

The party was very low on funds and had been enlisted to transport some expensive silk cloth to another town. The cloth was loaded on a donkey. They were given enough money in advance to buy food and would be paid when they delivered the goods.

They journeyed by day and camped at night. One night, some kobolds sneaked in and stole the silk cloth while the party slept.

Luckily the ranger could track, a trail of goblin-like footprints were soon found. These were followed until the party came to a circle of standing stones. In the middle of the circle was a stone slab, up to which the tracks led.

The party pushed aside the stone slab and could see that underneath was a stone staircase leading downwards.


So they lit two torches and ventured down the stairs with the paladin and dwarf in the lead.

As they moved forward, small glowing lights could be seen down a passage to their left. The party went down to explore and discovered 3 fire beetles in their lair. These were killed. The hobbit thief searched the room which was mostly rubbish but one scroll had somehow survived. The scroll was examined by the cleric and the magic-user and found to be a Scroll of Invisibility. Very useful as the magic-user didn't have that spell. 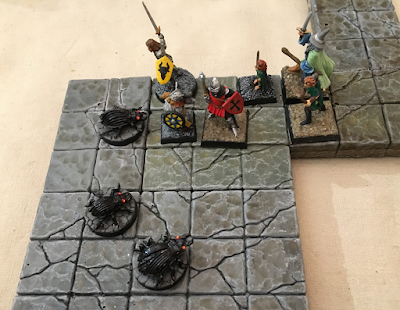 The party retraced its steps and then went further into the dungeon. The hobbit listened at the first door, and goblin-like voices could be heard behind it. 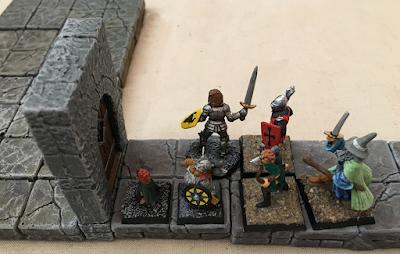 The thief failed to pick the lock, so the dwarf and the paladin kicked the door in together and rushed in. The room was the living quarters of a group of kobolds, bedrolls and supplies littered the room. There was a second door opposite and a small side passage. Eight kobolds moved towards the two intruders. 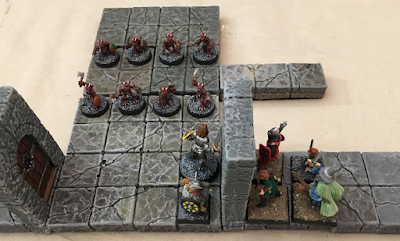 Our two heroic adventurers hesitated, giving the kobolds a chance to attack. The rest of the party remain outside the room. 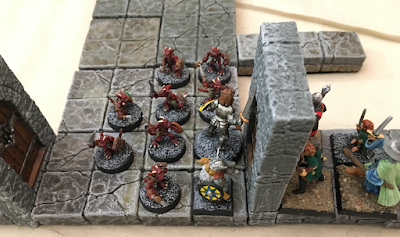 While the dwarf and the paladin fought the kobolds inside the room, three more kobolds had sneaked through a small passage and exited via a secret door behind the party. The hobbit and the magic-user fought them until the ranger turned and killed them. 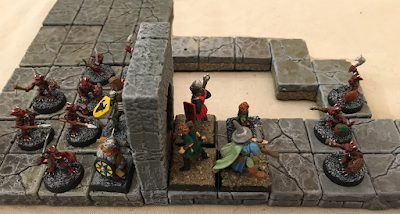 Seeing their comrades being slaughtered by the dwarf and the paladin, the remaining two kobolds fled the room via the other door.

Only the kobolds' personal belongings and a few copper coins were found in the room, so the party then followed the fleeing kobolds. They traveled down a passageway to another door which was promptly kicked in. The whole party, except the magic-user, rushed in to be met by a group of eight warned kobolds; including a leader with a big axe and a shaman. The party slaughtered the kobolds, but not without taking damage, the leader's axe and the shaman's magic missiles both took their toll. 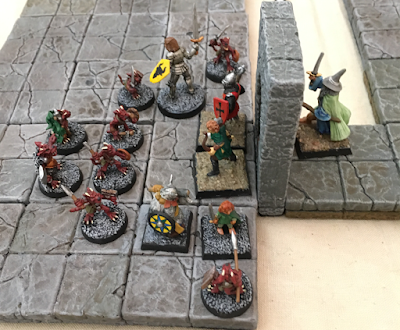 The room where the fight occurred contained nothing of great value, but the adjacent room was the chamber of the leader and the shaman. It contained their two beds plus two chests, stores and a grate in the floor.

The hobbit rushed to the chests, picked the lock and opened it. Unfortunately he forgot to check for traps and a poison needle went straight into his hand. Taking damage, the hobbit fell asleep. The cleric rushed forward and shook the hobbit until he woke up, whereupon he promptly picked the lock of the second chest, this time remembering to check for traps. The chests contained an number of small leather bags containing a mixture of all sorts of coins, which the hobbit quickly valued at 100gp total.

The party gathered round the grating as the hobbit peered in. In a pit under the grate was a dog. The hobbit threw in some of the party's beef jerky from their trail rations. This the dog seemed to appreciate, so the hobbit opened the grate and allowed the dog to jump out. The dog was happy and immediately started licking the hobbit and looking for more beef jerky. 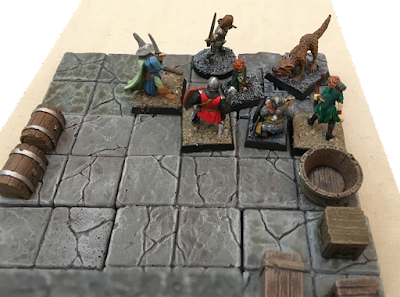 The next door was barred from the outside. It was obvious that there was something behind it that the kobolds didn't want to get out.

So the party unbarred the door and went in. Behind was a chamber with 4 pillars and piles of bones along each wall. The hobbit went in first, accompanied by his dog close by his side. When they passed the first set of pillars, the bone piles started forming into 8 skeletons.

Just as the skeletons had formed, the cleric pulled out his holy symbol, held it above his head and shouted loud and clear "Flee Before the Power of Law, Foul Undead Things of Chaos!". This was, somewhat to the party's surprise successful, and all the skeletons fled. 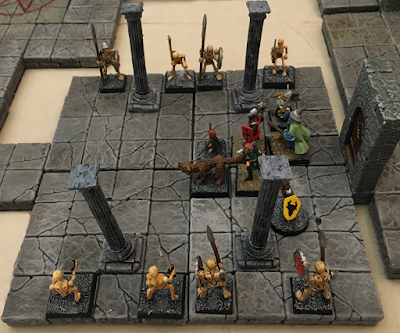 The party pushed on through the dungeon without stopping to search the skeleton room. They arrived in the next room; ahead of them was a door flanked by two stone gargoyles and a pentagram inscribed on the floor in front of the door.

The party spent quite a long time, slinging stones and shooting arrows at these stone statues without much noticeable affect. 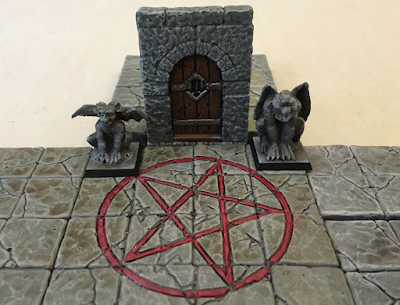 The party moved forward towards the door and as the clerics foot touched the pentagram the gargoyles came to life. Four party member attacked and two held back using distance weapons. The gargoyles were defeated. 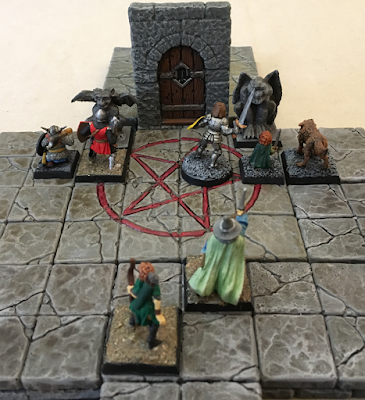 The party now passed through the door and entered to room behind.

The room was empty except for a sarcophagus in the centre. The party surrounded it and discussed how to open it. The paladin sheathed his sword and pushed the heavy lid. 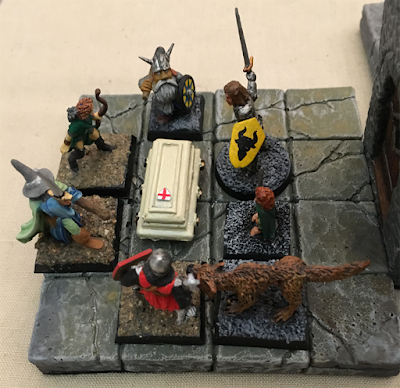 The lid opened and a skeleton flew up, clad in a flowing toga, wearing a glistening crown and wielding a vicious looking sword. It started by attacking the cleric and when the sword hit the cleric it flashed with green light.

Yet again the cleric pulled out his holy symbol, held it above his head and shouted loud and clear "Flee Before the Power of Law, Foul Undead Thing of Chaos!". Somewhat to the surpise of the party, nothing happened and the foul undead thing continued to attack.

The fight continued, but the foul undead thing was seriously outnumbered and had really no chance. 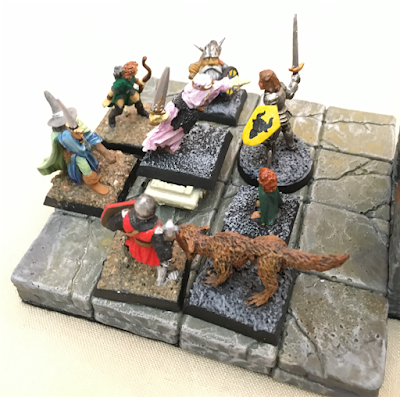 Having disposed of the sarcophagus’ occupant, the party searched the room.  The paladin picked up the sword which he determined to be magical and a good replacement for his own. The thief looked at the crown and decided it was made from metal and jewels worth 200gp, probably worth more if it could be sold in the right place to someone needing a crown.

It was however the dog who was the happiest of all, having picked up a very nice thigh bone from the skeleton.

The party headed back out of the dungeon, but before they came to the exit stairway the met a small party of kobolds carrying a newly captured sheep between them. Two kobolds were killed and the other two decided to run for it.

The party returned to their campsite and spent another night there before continuing on their way with their mission to deliver the silk. However this time they remembered to keep watch all through the night.